Look out for Elm Leaf Beetles in Canberra 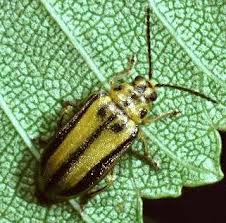 We have had calls from people who have discovered Elm Leaf Beetles lurking in their elm trees in Canberra and the region this week. If you spot these little guys with their racing stripes on your elm tree we can help you out.  The best time to treat your trees for Elm Leaf Beetle is now!

The Elm Leaf Beetle(Xanthogaleruca luteola) is about 4-6mm long, olive and black with two stripes. The beetle and its caterpillars can totally destroy an elm tree in one season. As elm trees come into leaf with the arrival of spring the adult beetle emerges from its winter hibernation. The beetles feed on the leaves in the canopy of the tree where they lay yellow eggs on the underside of the leaves that then hatch as black and yellow caterpillars or larvae. The larvae feed on the green tissue of the underside of the leaf. The larvae then crawl down the trunk and pupate in bark cracks or around the base of the tree. The pupate emerge as adult beetles and return to the foliage to continue the cycle of destruction.

Keep elm trees free of dead limbs and suckers as well as minimizing drought stress to give them better resistance.  Keep elm trees watered in dry periods. Fertilise in late winter with slow release fertiliser. Avoid compaction of soil over root zone. Encourage good soil conditions by covering the root zone with mulch rather than lawn.

Treatment The Elm Leaf Beetle will never be eradicated but it can be managed.Early treatment is essential and can include:

TreeWorks does not recommend soil injection which involves injecting the soil under the drip line of the tree and can be applied to trees of any diameter. Soil injection requires up to 100 L of water per tree and is not recommended when soil moisture is low. The chemical is taken by the feeder roots and translocated through the tree’s vascular system to the shoots and leaves where it will kill the adult beetle and the larvae. As the movement of the chemical is slow the injections need to be carried out around 6-8 weeks prior to the beetles emerging from hibernation. Soil injection is detrimental to soil flora and fauna, including earthworms and mycorrhiza. Applications near creeks and rivers or near food gardens pose particular risks for invertebrates and human health as it will kill everything in the soil.
Timing – The best time to treat elm trees is NOW.  Stem injection can be done any time but ideally before the beetles have laid their eggs or just after the eggs hatch.  Trees should be treated every three years.

TreeWorks is a leading tree services business operating in Canberra, Monaro, Southern Tablelands, Southern Highlands and Sydney. We are a fully licensed, ACTEW accredited & insured tree surgery company and a member of Arboriculture Australia. Our climbers are appropriately trained and some of our arborists have over 25 years experience in large scale tree surgery and removals. Call 1300 135 835 or visit www.treeworks.net.au for more information.